Thermal mass is the ability of a material to absorb and store heat. Concretes high thermal mass, as part of an integrated passive solar design approach, can significantly reduce heating and cooling energy requirements and the associated green house gas emissions. It makes economic sense for householders to invest in a thermally comfortable home that will provide cost savings for the rest of its life.

Global warming is widely recognised as a significant threat to our on-going wellbeing; and there is a world-wide effort to reduce greenhouse gas emissions, the principal cause of global warming. Building sustainable energy-efficient housing is one of the ways to effectively address global warming, with the added benefit of reducing heating and cooling costs. Using concretes high thermal mass (as part of an integrated passive solar design approach) can significantly reduce energy consumption and the associated CO2 emissions by reducing or, in some climates, eliminating altogether the need for heating and cooling systems.

Environmental life cycle studies have demonstrated that the majority of energy used in a house is consumed during its operational phase. Space heating and cooling to provide comfort conditions is one component of energy household consumption. Recent sutdies show that almost eight in ten dwellings across Australia are artificially heated. There has also been a substantial increase in the number of households with air conditioners.

Electricity produced by coal-fired power stations is the main source of energy for household heating and cooling in Australia. In the two-year period ending in 2010, the cost of electricity has risen 20% on average across Australia. An additional rise as much as 60% in some states, is expected over the next three years.

The health and comfort of occupants are primary objectives of any house design. The thermal mass of solid concrete elements in a house can be used to reduce energy consumption for space heating or cooling., while maintaining a comfortable environment. Concrete can be used for internal and external walls, slab-on-ground and, in multi-storey dwellings, suspended floors. A house using well established passive solar design principles, will use less energy, an result in less greenhouse gas emissions durings its life cycle, when compared with houses built of low-thermal-mass lightweigh materials. 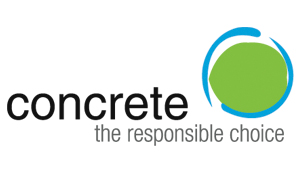 Thermal mass (also called thermal capacitance or heat capacity) is the ability of a body to store heat.

Dwellings with high thermal mass are characterised by their inherent ability to store thermal energy, and then release it several hours later. In summer, heat is absorbed on hot days, preventing the internal temperature from rising excessively. Provided that the climate is such that the nights are cooler than the comfort level, the cool night air can ventilate the building and purge the accumulated heat that is emitted from the concrete building fabric.

During winter, when heating is required, the thermal mass is used to help keep the dwelling warm and to reduce heat energy consumption. The principle is effectively the same as for summer, except that solar gains are encouraged through appropriately specified windows on a north facing facade. Heat is absorbed by the thermal mass during the day, and then slowly released at night. This is the same as for summer nights, the only difference being that, during winter, this is useful heat, with windows kept shut to minimise heat loss. 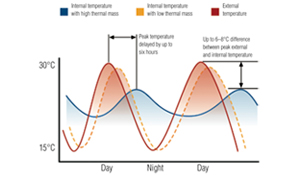 The benefit of concrete floor slabs is particularly apparent in winter, as most of the sunlight, entering through the windows, falls on the floors. If the slab is to be covered for aesthetic reasons, materials such as quarry tiles, slate or vinyl with good conductance should be used on those parts of the floor receiving direct sunlight. Increasingly, concrete floor slabs are being left exposed (and typically polished.) If the concrete is coloured, dark colours permit the solar energy to be absorbed directly into the concrete. While mid-range coloured materials will reflect some of the solar energy - this may be an effective way of distributing it to other thermally massive surfaces, such as walls elsewhere in the direct-gain space. Carpets or rugs should not be used on slabs receiving winter sunlight.

In summer, a concrete slab-on-ground acts as a large heat sink, benefiting from the grounds near-consistent low temperature. When concrete internal walls and insulated concrete external walls are also used, the total heat storage capacity is enhanced. The house reacts slowly to outside temperature fluctuations, and there is thus a reduced dependency on mechanical cooling to produce a comfortable internal temperature.

To maximise the benefits of the cooling cycle in summer, good cross-ventilation should be provided. If the night-time external air temperature is lower than the comfort level, air flowing through the building will remove the heat stored in the building fabric during the day. This is commonly referred to as 'night purging'. When this cooled air is circulated by fans, particularly ceiling fans, it can rapidly assist in achieving comfort conditions.

Solar shading should be configured over northern windows so as to minimise the amount of summer sun reaching the interior. Further protection by means of a pergola covered with deciduous vines or adjustable fabric or metal blinds on the north-facing windows is also desirable. This protects the windows from heat gain in unseasonablely hot weather occurring in early autumn or late spring.

As the outside temperature increases during a summer day, the walls and floor absorb heat from the outside air and delay the rise in the internal-air-temperature. 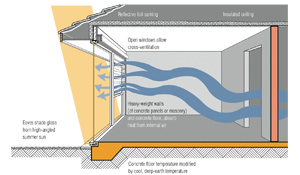 It is important that the distinction between the thermal mass and the structural weight of an element is understood. It does not necessarily follow that a heavyweight construction will automatically provide a high level of thermal comfort - this depends on the extent to which the elements can thermally interact with the occupied space, ie exchange heat with the internal environment. This relationship is known as thermal linking. It is therefore important that the insulation in external walls be behind the concrete inner leaf. If ground floors are insulated, the insulation should be located below the slab. The simple rule is that, as far as practicable, the surface of the concrete should be left thermally exposed, e.g. by using finishes such as paint, tiles or plaster. The presence of internal finishes such as plasterboard and carpet (particularly underlay) will, to some extent, act as an insulating layer and reduce available thermal mass.

Provided there is no insulation below a concrete slab-on-ground, it will act together with the ground, at near-constant temperature, to provide enhanced thermal mass. The edge of the concrete slab-on-ground should be insulated in severe cold climates to prevent heat loss. To maximise heat exchange to and from the slab, the surface receiving sunlight should not be carpeted. A thermally-effective finish can be achieved by using materials such as high density concrete.

Slab-on-ground floors with under-floor insulation work well with under-floor heating, which is ideally suited to high thermal mass dwellings. Generally, the pipework for an under-floor system is located within the surface screed.

Concrete suspended floors may provide many of the same benefits as slab-on-ground by virtue of their substantial thermal storage capacity. Many precast concrete suspended flooring systems are structurally stronger, have better fire and acoustic ratings, and can offer speed of construction, when compared to lightweight alternatives.

The high quality fair-faced finish of precast hollowcore unites makes them an ideal choice. Composite floors consisting of precast concrete permanent formwork (reinforced or prestressed) and an insitu concrete topping are also effective. The concrete formwork can immediately be used as a working platform. Minimum or zero popping is required. Services such as under-floor heating/cooling systems can be installed prior to placing the insitu concrete topping. 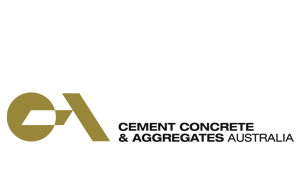