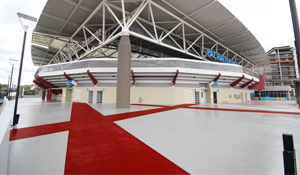 The Queensland Tennis Centre is an $82million state of the art tennis facility based in Brisbane. The centre boasts twenty-three tennis courts, including two showcase courts and a centre court, The Pat Rafter Arena. The tennis centre is host to a number of internationally acclaimed competitions each year, most notably the Brisbane International which boasts some of the biggest names and crowds in tennis.

The Queensland Tennis Centre, which first opened its doors in January 2009, has recently undergone a large rectification & refurbishment project to the external concourse and under croft of The Pat Rafter Arena. 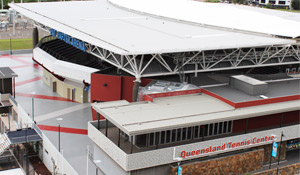 This rectification took place due to the original epoxy coating system used on the concourse failing on two previous occasions. The original system was not installed in accordance with manufactures guidelines; furthermore the epoxy laid was incorrect for its intended usage and environmental requirements. As a result the topcoat was yellowing due to UV exposure and more concerning yet was the delamination of the coating on a large scale around the stadium.

Transitions Polishing and Grinding were contracted to rectify the external Epoxy floors of The Pat Rafter Arena. Transitions approached the tender with two different systems that were suitable for the project.The system that was chosen was designed based on the experience of installation in other major stadiums around Australia. 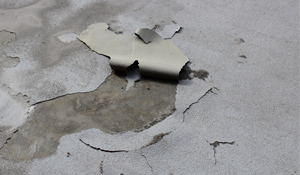 The chosen Epoxy system was selected as it fulfilled the set of criteria put in place for the job. The environmental conditions meant that the system installed needed to be both hardwearing and able to withstand the harsh weather conditions Queensland presents. Its UV stability and level of weather resistance was ideal for the project. With this in mind the coating required a high non-slip resistance and endurance to large amounts of traffic, intermittently.

Additionally, with a short timeframe till completion, the system chosen needed a rapid curing rate to ensure that the five-coat system could be completed in time. The floor was walkable the day after application and heavy vehicle access was granted within five days of application. 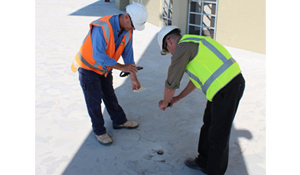 Following a lengthy pre-preparation process, which included the removal of the existing coating and membrane, treatments to surface cracks, patching around drains to reduce water pooling, ramping up to tile finishes and preparation of the surface for the paint application, Transitions implemented thorough quality control measures.

Quality control was a continual process that took place at the beginning and in between each coat application to ensure all varying factors aligned.Factors that were tested and recorded included surface moisture, air and surface temperatures, relative humidity, product temperatures and general weather conditions. Recording this information highlighted to Transitions some key areas of focus and care, as well as noting particular times of the day where work could be completed due to temperature and moisture levels. 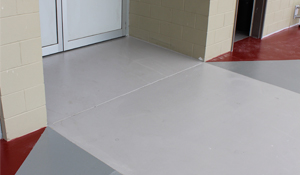 The Epoxy coating installed was a two-part epoxy in three colours, matching the intricate design selected by Tennis Queensland and designed by Mirvac. The design was made up of two shades of grey and a deep red colour and was laid out in both an aesthetically appealing and scientific manner.

The design of the Epoxy coating represented a tennis ball ricocheting from one wall to another, around the complete circumference of the stadium. This was achieved through the use of large 2m wide and up to 50m long strips of deep red stretching between the stadium and the bordering walls. The psychological principle that inspired this design suggests that the use and placement of the red lines with a lighter coloured background (grey) directs traffic away from the entry and exit points of the stadium, thus preventing congestion around the stadium at game interval times and full use of the space provided.

The rectification of the Queensland Tennis Centre took just five weeks from the starting date until completion. All parties involved with the project, including Tennis Queensland, are delighted with the results. The epoxy floors on the external concourse and under croft of The Pat Rafter Arena are looking vibrant and are more than adequately serving their purpose, as demonstrated at the recent Brisbane International Tournament. 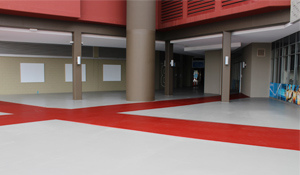 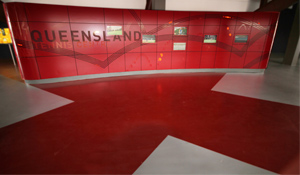