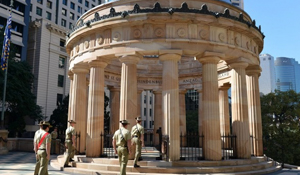 The square between Ann and Adelaide streets is a memorial for Queenslanders who have served their country, and will be a key site when the 100th anniversary of the Gallipoli landing is marked this year.

Below is the recap from Channel Seven News on Tuesday 17th February 2015.