Transitions' award winning project at Fashion Spree Shopping Centre in Sydney has this month become a feature story in Concrete Surfaces Magazine, in the United States. Read the full article below. 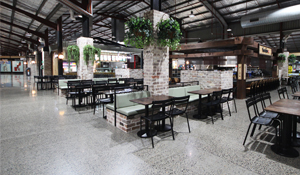 When John and Maureen Carr began making Australia's premiere recreational vehicles in the 1960's, their 157,000-square-foot factory in a Sydney suburb was "the biggest complex of its type in the southern hemisphere." Viscount Caravans are now a coveted collector's item, but the space lives on. Instead of tearing it down, real estate developer Gazcorp turned the space into a designer-label outlet mall with 50 tenants.

Transitions Polishing and Grinding in Queensland landed the job of exposing the inner beauty of the decades-old concrete slab that hadn't been maintained. Several sections had been severly damaged and were poorly repaired. Most was buried under epoxy or tile.

Removing all that without damaging the substrate was one challenge. Another was working with 35 tenants to deliver the floor they specified, which wasn't necessarily the same finish as the mall's common areas. And yet another was matching repairs to a 60-year-old concrete mix.

Fortunately, the contractor's crews had experience with similarly substandard canvases. We asked General Manager Courteney Franks how they pulled off the job, which won our 2016 Polished Concrete Award for retail projects.

What was unusual about this project?

The client wanted to pay homage to the building's 1960's industrial aesthetic. That meant retaining as many structural elements as possible, including the concrete floor. The first thing to be installed, it represents the era's concrete mixes and workmanship techniques.

However, it had been treated as a functional element that didn't require any particular care or maintenance. Almost 600 square yards were covered with ceramic and vinyl tile and 2,500 square yards had been raised to the level of adjacent sections with layers of epoxy self-leveller. Tenant stores would be located where toilets and kitchens had been, so numerous set-downs and drain cutouts had to be filled in.

Our job was to turn this 60-year-old uneven, unloved concrete into an unblemished surface with gloss levels of 50 to 60 (semi-polished; objects in relections are identifiable but not details) and distinction of image (DOI) of 65 to 75. With existing slabs, this level of expectation for the finish can be unrealistic, especially when a building was used for industrial purposes.

How did you protect the substrate when removing old coatings and tile?

We wouldn't know the conditions of 90% of the slab until we removed existing finishes. Jackhammering, shotblasting, and scabelling could have made achieving a high-quality polish impossible, so gentler methods were necessary.

Ensuring the entire slab was level entailed removing 2mm to 4mm with tooling ranging from 25 grit metal-bond to polycrystalline diamond (PCD). We ulitmately disposed of 52 tonnes of debris and concrete dust.

How did you match areas that had been damaged or needed to be replaced?

Although our ready-mix supplier was able to closely match the slab's aggregage, there were slight colour differences in the binder. The supplier pulled the aggregate from the same quarry that was used when the factory was first constructed to get the best match possible. The client accepted this and simply stressed that the finish had to remain the same.

Patches less than 1 square yard were repaired with that mix and an epoxy mortar that set within 24 hours. Larger patches were repaired with high-strength concrete that was cured for a minimum of seven days. The below-grade section, set-downs, and drain cutouts got the same treatment: Ardex Group's P51 primer followed by K005 bulk-filling compound and 10mm of K80 self-leveller.

Then we used Husqvarna’s Hiperfloor system over common areas and for tenants that specified polished concrete. The three-step polishing system starts with GM3000 filling compound to fill in air bubbles and holes left by extracted aggregated, then Hiperhard densifier and Hiperguard Enhance Plus penetrating sealer are applied.

The developer and some tenants then chose to apply grey epoxy, Sika Corp.’s Sikafloor 164/264. Tenant floors that couldn’t afford or didn’t want polished concrete were finished with Sika polyurethane flooring.

Additionally there were only small sections of the floors that had set-downs and the owner didn’t want stores that had partial bulk filled sections and partial existing slab in the one space. These set-downs were different from the other repairs since there was not enough depth to fill with a traditional concrete mix, so an engineered bagged material was installed. For these stores, epoxy was chosen as the uniform floor finish. Two of the three tenants who had to have epoxy installed have epoxy in their corporate design brief anyway. So regardless of the substrate they still would have proceeded with an epoxy floor.

What unique challenges did the project present?

Concrete pedestrian ramps connected the building’s four levels. Polishing any surface that isn’t horizontal is challenging, so you can image what pushing a 700 kg grinder up those inclines was like. Also the client wanted the exterior surfaces to blend with the interior surfaces, so we honed 1,600 square feet of external pathways and entryways. Honed concrete is basically the exterior version of polished concrete, with a higher slip resistance and high UV stability. CS

Justin Deffenbacher is a Senior at Northwestern University's Medill School of Journalism. He is studying journalism and economics and will graduate in the Spring of 2018. Justin has written and produced for news outlets including South Africa's Sunday Times and Nebraska's KETV Newswatch 7.